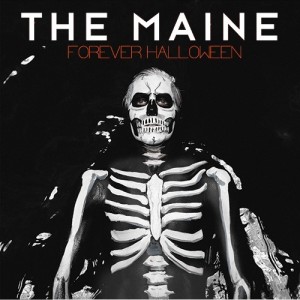 When The Maine released their debut album Can’t Stop Won’t Stop in 2007, the group identified themselves as a pop punk band, with their catchy choruses, and fast pop songs with hints of punk rock seeping through, all while writing bubblegum songs that didn’t get past their mostly teenage fan base. For those fans that chose to stick around, they would go along for a ride that would see The Maine evolve from a pop punk flash in the pan to a band that is no longer signed to a major label. Now instead of writing music for the masses, they sound like they are writing music for their parent’s generation and not for theirs. Now the group is writing rock tunes whose appeal goes beyond their young fans, while also making all of their musical decisions themselves on Forever Halloween.  By keeping their decisions concerning their music between the band members, they have come out of their previous record contract a stronger and more solid unit. The group headed to Nashville to record Forever… using old fashioned analog tape, while recording every song as a group live, which was a first for the band.  While it takes a really seasoned group to pull off this style of recording, The Maine have nailed it.  With Pro Tools being completely absent from the record, the record has a warm and beautiful quality.

The first track “Take What You Can Carry” focuses on the groups feelings of playing music for themselves, and being in a music industry where corporate edict trumps creativity. The track is a great opener for the album, beginning with handclaps, and some of the best guitar riffs from guitarists Kennedy Brock and Jared Monaco in their six year career. The song sets itself up as a good jam tune, with a chorus that will get stuck in your head.

The song “Happy” begins with carefree “woo-ooo’s”, and goes into a straight ahead rock tune that remains simple. The thing that is most noticeable about a tape recording is how clearly you can hear each member, giving “Happy”, a much warmer and fuller feeling.  “These Four Words” is a piano track filled with pain over a break up, and the ambience that the song gives off is beautiful. With just piano and vocals, we get to experience lead singer John O’Callaghan’s vocals in a setting that is rare. When you take away all of the instruments, and just have his voice over the piano, you can see that he truly is a talented vocalist.

The sky is the limit for what the band can release in the future, and Forever Halloween is the first step in the right direction.  Now the band has forged a path to creating the kind of music that they want, freeing themselves up to be as creative as possible.